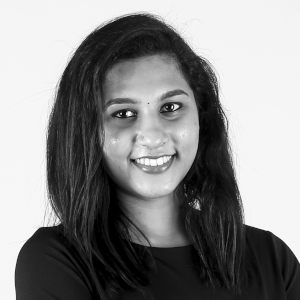 Hey there! I’m Swaathi, the co-founder and CTO of Skcript. We help organizations transform with fast product innovations where we focus on technologies like AI, Blockchain and Robotic Process Automation (RPA).

I founded this company when I was in college and we’ve been bootstrapped for the past 7 years. We now have offices in India and Dubai and have built products for some of the largest private and government owned businesses across the world.

I’m a self taught programmer and I say that despite holding a CS degree - tech education in India is really not at par with the world. My first foray into business was a coding bootcamp where we would teach web and mobile development. However, that was a huge failure since I really didn’t know anything about business. However the second thing my co-founders and I tried really kicked things off the ground!

I greatly enjoy building and scaling things with technology. I’ve picked up multiple hats in my 7 years of business, from web development to machine learning to tech-enabled sales. However, the one thing that remains near and dear to my heart is web development. I love building with Ruby on Rails and Phoenix.

My transition to manager was both organic and abrupt! Quickly after setting up a tech business, I realized it has nothing to do with tech. One of the motivating factors for me to start up was that I loved to code, however running a startup is so much more than that.

After about 3 months of independently coding, we hired our first “team”. Our team consisted of one backend developer and one designer. This was when I first realized that great teams are not just built by great people but great delegation. It was then that I started to plan out architecture or discuss database setup with my team, instead of making all the decisions myself and assigning tasks to people.

Soon after, I got really interested in maintaining the quality of the codebase we built. I set up the company's first QC process for code! It involved code reviews and pair programming. It’s still very efficient to this day.

I think one of the first bumps in the road developers face when moving into a management role is the amount of interaction with humans! I sorely missed my days of just sitting at the desk all day and hacking things out. Management is so much about talking to people, moving about and making decisions. I was absolutely enthralled by the challenge in front of me!

My day usually starts off with a quick 15-20 min standup with all of the teams that I manage. I always hope that it’s only code issues I have to deal with, but more often than not I do a bit of PR and marketing for the company as well. We organize webinars or write in depth use cases to showcase the team’s core strengths. I also take care of the editorial content and have a mandate for my team to write at least one tech blog a month.

Then my favorite part of the day starts - coding! I spend about 40% of my time in active development. The rest of the time is spent in code reviews and deployments. Code reviews are completely done on Github, I love the new interface they’ve bought in for it, makes life so much easier! One of the things I make sure to do during reviews is acknowledging and highlighting the parts of the PR that are fantastic. So often code reviews become an environment of finger pointing and negativity. It shouldn’t be that way, code reviews are a place for growth without fear of judgement.

Another fun thing I like to organize are monthly refactors. In our line of work, speed is so crucial. Unfortunately this leads to some ugly practices being followed to ensure we “build fast and break things”. This monthly refactoring session involves teams coming together with nothing on the agenda except to clean sh** up! We are very methodical about it and actually do a planning session first, map out all the places that can be improved and then set right to code.

It would definitely be the amount of time I get to code these days - it feels like a luxury when it happens!

As a manager you often try to streamline engineering efforts. This means choosing a stable and well adjusted stack. The downside is that you tend to stick too much to the past and are very skeptical of trying something new. This causes you to often easily lose touch with the latest and greatest of tech - which happens literally every other week! This is not a good thing for a developer and definitely not god for a manager.

At the end of the day, I miss facetime with code!

Management is about people. You need to empathize with your team, lookout for them, and still ensure product deliverables are being met! It’s not always about technical decisions, I had to pick up a lot of soft skills to build a great team.

Give people a chance. People management is not like giving instructions to a program, it’s more like training an AI model! It takes time and effort, you can’t judge on the first go. Give people time and encourage them to be the best version of themselves.

There’s a whole plethora of information on our website, you can learn more about what Skcript does and how we do it! You can also follow me on Twitter.