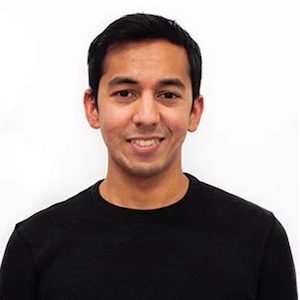 Hi there, it’s great to be here! I’m currently working on Leadup, a Slack app that helps managers organize everything they need to know regarding their teams. Previously, I was the VP of Engineering at Hipmunk, which was acquired in 2016 by SAP Concur. Before that I was an early engineer and team lead at Roblox. I’ve been in tech for over a decade now and am starting to feel old.

I was tapped to be a team lead pretty early on in my career. At first when I was offered the role, I refused. I thought to myself, “why would I want to do that?” because at the time, I only saw the downsides to leadership. Luckily my manager pushed me to at least give it a try. So I tried it and realized that I enjoyed helping and teaching people.

I continued on the management track at Hipmunk as an Engineering Manager. Early on there I still had plenty of time to write code, which came in really handy later on when big technical decisions needed to be made. My manager was extremely supportive and helpful. I got some great advice and was able to practice and refine my leadership skills. I learned how to recruit, the importance of 1:1s, how to deliver feedback properly, how to communicate effectively, and how to listen.

I became VP of Engineering when my manager left and designated me as his successor. This taught me a whole new set of skills like how to align an organization, work with other execs, and develop a self-sustaining, healthy team culture. Up until this point, I had continued to write code but it was around this time that I decided to stop. Part of me still wanted to but the better part of me realized that my time was better spent doing other things. I do think it’s critical to stay up to date with the codebase though so I made sure I still set aside time to read pull requests.

Since I’m currently working on a startup, every day ends up being pretty different. Usually, I’ll get up and check on analytics first thing in the morning. Then I’ll catch up on email and look at my calendar to plan my day. Then I might be doing some coding, attending meetings, or be working on sales and outreach. Then it’s lunch, check email again, and continue on my main tasks for the day. Around 6pm, I usually do a final email and analytics check before calling it a day.

Right now I’m primarily motivated just to see my startup succeed. Working for a company and taking pride in your work and knowing that your helping build something amazing is incredibly rewarding. But it’s a completely different feeling when it’s something that you’ve built from the ground up and that sense of pride is multiplied by 10x.

2016 was the hardest year in my career. It was the year of the acquisition but it was also a really tumultuous time at the company and there were definitely times when I felt like I was drowning. As others have said, it can be lonely at the top and it was the first time in my career where I felt like I was on my own without any kind of support system. As I’m sure many out there can sympathize with, it’s tough being thrust into a sink or swim scenario and I basically had to figure out how to keep the ship afloat as the team experienced turnover, tight deadlines, and an impending acquisition.

It was the darkest chapter of my career. I came to really understand how much of a grind recruiting could be and I struggled with burn out. What got me through it was my girlfriend at the time (now wife) believing in me and giving me her support. She taught me one of the most important lessons of my career: even though I didn’t necessarily have a support system at work, I had one in friends and family.

Honestly, my biggest surprise was that not only would I be good at management but that I would find it so fulfilling. Leading your team to hit all its OKRs gives you a great sense of accomplishment. And while that’s part of the job, what really makes it worthwhile is having someone sincerely thank you for your help, whether it was something as small as a little advice or as large as career guidance. For example, I had someone who was really unsatisfied in their role and was on the verge of leaving the company. We had a good conversation around what was troubling him. Sometimes being a manager is like being a therapist, you just have to listen. We decided to put him into a new team, working on a completely different tech stack where he didn’t know much but was very passionate about it. He thrived and so did that project. It felt good helping him find his place and he was still at the company when I left 2 years later.

Another surprise was how you can actually help people by pushing them. Just like my manager pushed me, I gave one of my best engineers a nudge to become a manager. And just like me, she was reluctant at first but gave it a shot. A year later she was still a manager and I’ll never forget when she thanked me for pushing her to try it. Don’t be afraid to give that extra nudge every now and then. Just do it respectfully.

If you put your team first, you will succeed. Being a manager changes your focus from how you’re doing to how your team is doing. Try to weigh every decision based on what’s best for the team. Always put your team first, even if it’s something as simple as putting the other person’s name ahead of yours in a 1:1 invite.

Now that’s not to say you should neglect your own needs. I often hear people say something like your job as a manager is to fill in the gaps. Basically, they’ll pick up the slack and do what no one else can or wants to do. Or they’ll take on every fire drill because they’re trying to protect their team. That’s a dangerous path to follow and can lead to you becoming burnt out and your team becoming too reliant on you and never growing themselves. You need to balance when you should do something yourself and when it’s better to delegate. Your job as a manager isn’t to fill in the gaps. It’s to help your team succeed. Trust that your team can do it, and help them if they can’t.

Switching from an individual contributor to a team lead is often the hardest step. It’s the first time in your career when you won’t have complete control over your work. This is the essential trade-off when it comes to management: impact vs control. When you rise up the management track, you are giving up control for the impact you can have on the company. Your work will become more impactful but you can’t do it all yourself and you can’t micromanage people. You’re going to have to learn to teach people to do things the way you want them done. Once you learn that progressing further along the management track is really just more of the same.

If you’re afraid you won’t have time to code, don’t be. I still spent about 50% of my time as an Engineering Manager coding. It wasn’t until I became a VP that I decided to stop and even then I could have continued if I really wanted to. If you’re on the fence, my best advice is to give it a shot. It’s easy to switch back to a developer if you don’t like it but if you never try being a manager, you might regret it later.

You can learn more about my new startup at getleadup.com or more about me at navinlal.com. Let me know if you’re looking for advice too. I’m happy to help!