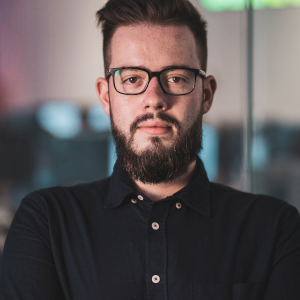 VP of Technology at Nodes

Hi there, I'm Dominik! A self-taught developer-turned-manager from Prague working at Nodes, a digital transformation consultancy, and development agency with a heavy focus on beautiful and functional software and especially mobile applications.

As soon as I got my first computer, I started tweaking it, hacking it, breaking it until I got to coding. First, it was static websites and simple programs. A year or two after that, I figured I could write a "math homework solver" program, and suddenly I was freelancing as a WordPress developer at the age of 14 (not sure if that was entirely legal ¯_(ツ)_/¯). Out of the blue, the iPhone came out, and I knew I wanted to make apps, or rather, games for it - well, at least after the App Store and first version of Xcode (oh, what a mess!) got released.

By the time I was 16, my dad and I opened up a game development studio and set up a team of 5 to make games. We even had success when Facebook chose our game Pyro! - an AR fire & explosion effect entertainment app - as the launch title on the then-new Messenger platform and presented on stage during the keynote given by Mark Zuckerberg at F8.

Unfortunately, we weren’t able to find a sustainable commercial model, and after a few years of trying, we had to give up. Quickly after that, I moved to Copenhagen and joined Nodes, a consultancy/digital agency. I started as a Senior iOS Developer, and after almost five years, I'm still in the same company, albeit in a very different position.

If I had to sum it up, I'd say sudden, fast, crazy, fantastic, and unreal 🙃. When I started, we had a relatively small but skilled team (and an even smaller iOS team). Nevertheless, it was the largest team I worked on at that point in my life, and it was my first job at a company that wasn't mine. Fortunately, I was lucky to have amazing colleagues teaching me along the way.

After a year and a half, the then-current iOS Lead, my good friend Kasper, decided to pursue new challenges. By that time, I had already established the position of a specialist on the iOS team. The natural first step towards a manager role was answering "yes" to a "Would you like to lead the iOS team?" question and move to our London office.

Another year and a half passed, and I decided that it was time for me to come back home to Prague. At the same time, the company was expanding into new markets, and I half-jokingly suggested Prague, which to my surprise worked! So there I was, suddenly setting up a new branch, hiring employees, finding offices, starting client relationships, and acting both as a Managing Director and Technical Director.

Around 1.5 years ago, our company got bought by a Japanese conglomerate Monstarlab, adding 20 offices in Asia and another 2 in the US into the mix. And this February, I moved into the Group VP of Technology (Operations) role, which lets me unify how we handle service management, tooling, accounts, security, compliance, and many other things across the entire group.

My days are usually at least half full (I'm an optimist, see) with meetings with various teams and people across and outside the organization. I sometimes start the day with a business development coffee talk; other times have a weekly status update with the CTO and other management. As soon as I get to my computer, I start resolving emails; I have a strict zero inbox policy, and this has probably been the best productivity boost for me. I recommend using an email client which can snooze and archive emails easily. I also run a lite version of GTD (Getting Things Done), especially the part where if a task takes less than 5 minutes to do, do it straight away. I recommend the amazing Things application for iOS/macOS if you’re in doubt what tool to use, but pen & paper can work too.

Recently I've started a new project - to restructure and redo how we do service management, IT support, operations, and all the things associated with it so that we can scale better and faster. I've set up a Service Desk team, which I now manage and lead, which usually takes at least 25% of my time every day. Another 25% goes to the hiring of engineers, e.g., having interviews and reviewing code tests as well as just searching for candidates and communicating with them directly as I believe it brings the best results and builds up relationships early on.

I’ve delegated most of the dev team responsibilities to a colleague whom I promoted to being an engineering manager. Thanks to that, the amount of one on ones I do (I had 14 of them every month!) has dropped significantly.

Coding is becoming a hobby now - I get to develop around 5% of my time, which is, of course, significantly less than when I was a Technical Director or iOS Lead. Sometimes I miss it, but I compensate with writing quick and straightforward integrations, APIs, Slack bots, and whatnot during nights or weekends if my time allows. The impact and scale of what I do now gives me a lot of satisfaction (and occasional stress). :)

The toughest challenge was handling multiple initiatives, projects, and tasks at once with different stakeholders and various priorities while being fully responsible for my own time in addition to being responsible for the performance of multiple teams.

So, I outlined 3 key activities - focus, work-life balance, and delegating - and started performing them more.

Focus is the most difficult one because, in my role, I get messages and tasks from the entire organization or clients, and context switching is an expensive brain operation. Making a clear and precise to-do list or a kanban board and (re)prioritizing regularly is very helpful for maintaining focus and effectiveness.

I enjoy what I do at work and often take work with me everywhere, which has, in the past, negatively affected my work-life balance and, more importantly, my mental and physical health. I have resolved this by listening to my body and my mind - it gives me visible indicators of when I should stop working and go for a walk or play some board games.

Delegating is tough because it's hard to let go of things and trust someone as much as you trust yourself. However, this is crucial for managing workload as well as building up trust and relationships in the teams. It took me a while, but after I've started delegating, my workload has improved dramatically, and things didn't go up in flames - quite the opposite!

Every day is a surprise - that's why I am doing this. 😅 There's nothing more fun for me than learning something new every day. You can never prepare for everything, and that's why I welcome whatever comes as a new challenge and try to solve it - and of course, from time to time, it gets stressful, but at the end of the day, the learnings are always worth it.

Be honest. Saying "no" is never easy for anyone, but rejection is natural, and in many cases, needed and understandable. You're not required to approve everything every time, but make sure you have a justifiable reason. It is acceptable to say no to an unbudgeted salary raise mid-year or last-minute vacation request. Furthermore, being honest and open strengthens your relationship.

Trust your gut feeling. I've hired almost 16 people into the company during the last 3 years, and the general rule of thumb I abide by is to trust your gut feeling - even more than code tests, job interviews, or CVs. Know whom you want on your team and if you'd want to work with them every day.

Please don't force it! It has to be spontaneous, where the opportunity presents itself and when you feel you're ready. As a developer, you're often responsible only for yourself and, in many cases, not even for the product you're working on; instead, a PM/PO is responsible.

Consider that becoming a manager means you're responsible for your team and people in it. If you are to be successful at it, you need to do 1 on 1s, be attentive, and support them. It's not rocket science (unless you work as an engineering manager at SpaceX), and just being organized and understanding goes a long way. Be a friend rather than a boss.

Thanks for the interview!